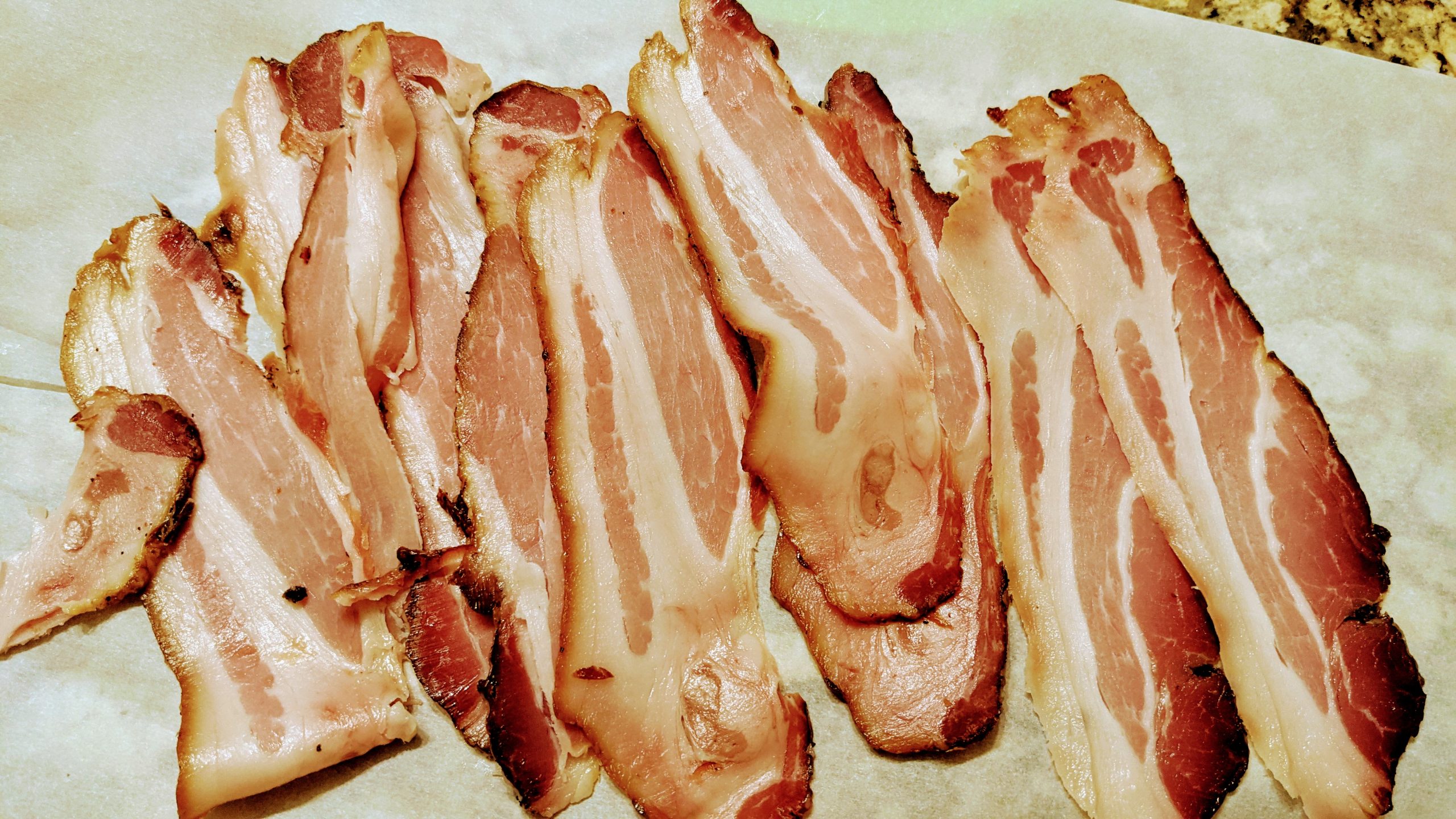 One day, I settled down on the couch to watch one of my favorite You Tube channels called “Suttons Daze.” The hosts, Leisa and Phil, did an episode taking pork butt and cutting it into country style ribs. When I saw this, my heart stopped – what a brilliant way to save money. Country style ribs are approaching $4 a pound in the store, but I could get pork butt on sale for 99 cents a pound. I looked it up and yup, country style ribs are cut from pork butt, so this wasn’t an imposter but the real thing.

Of course, I had to run out and get more pork butt roasts after seeing this video, after all it’s not just for smoking whole anymore… My husband Doug and I set up the cutting station and began to follow Phil’s instructions for deboning. As I was watching Doug cut the pork I said, “Wait! That portion looks like bacon!”

So I went to my trusty computer again to investigate if bacon can be made from pork butt. Yes, yes it can, and it’s called buckboard bacon. I felt like I entered a new reality, but nervously wondered if it would actually taste like bacon.

Thank goodness I got a smoker for Christmas. Since pork has to cure for 7 days before smoking, I quickly pulled out my calendar to find a Saturday my husband could man the smoker for the afternoon. I made up the cure, including pink curing salt called Prague Powder #1. According to “My Sage Spice,” Prague Powder #1, “…not only imparts a distinctive flavor to cured meat, but is also necessary to prevent food poisoning. The natural cooking environment for cured meat creates a habitat for growing bacteria causing botulism food poisoning. Prague Powder Number 1 is the ingredient that prevents this from happening.” Do not substitute Himalayan pink salt for Prague Powder, it is not the same thing.

With the pork butt, only some is fit for bacon. We cut portions into country style ribs, some for bacon, chunks for canning, little pieces for stir fry and other dishes, and the bone and scraps for pork broth which I canned right up. The pork fat gets rendered into lard. Literally nothing goes to waste. I assumed the pork butt scraps would be a little tough, but they are actually tender and premium for stir fry or carnitas. As for the pork broth, it’s used as a base for my wonton soup, and is my daughter’s favorite stock.

I’m finding not all regions of the country call this cut of meat pork butt. It’s actually not cut from the hind side of the hog, that’s the ham. The pork butt is the top shoulder, and the portion below is the “picnic” and isn’t as tender. I live in the south, and it’s called pork butt here, so if you don’t find it in your region, ask your butcher.

Don’t give into the temptation to cut the bacon right away after smoking, but rather allow it to rest refrigerated over night. I have a deli slicer and was able to cut mine into very thin slices. Any odd chunks can be diced for bacon bits. As for this experiment, yes, this tasted just like bacon made from pork belly except it’s meatier. Pork belly is typically $4 a pound, and this bacon has less fat and 25 percent of the cost at this sale price.

Since I know this works now, I’m going to save up portions suitable for bacon when butchering a pork butt, and freeze. When I get several portions, I’ll smoke them all at once to save time. While I do freeze in one pound portions, I also like freezing bacon in individual pieces. I roll them up and flash freeze. I cook with bacon quite a lot, so if I need a few slices for a casserole or greens, I don’t have to thaw out an entire pound. 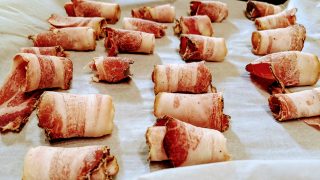 To get your bacon slices, cut the pork butt in half. 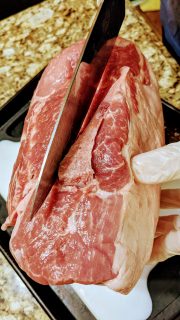 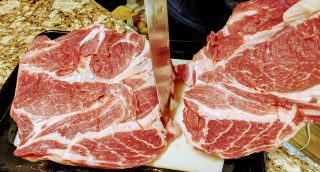 Then you cut the bone out. 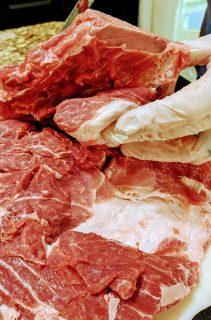 Cut into pieces for country style ribs, and the sections marbled like bacon is what we saved out for smoking. We left most of the heavily marbled section in tact, but did cut off a smaller piece while experimenting. It should have a fat layer on one side. The curing recipe and instructions are below. 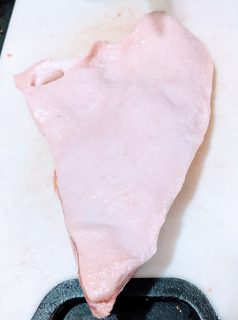 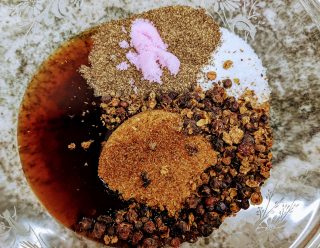 Rub in pork and place in container. 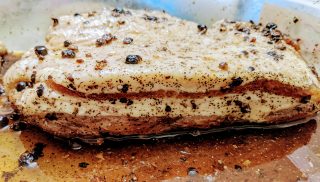 Cover and rub mixture back into pork, and cure for seven days. This is a picture after a few days.

The night before smoking, rinse under cold running water. Pat dry, and place on rack uncovered in fridge over night. The next day, smoke at 200 for 3-4 hours or until center of meat registers 150.

After meat is done, let cool. Wrap in foil and place in fridge over night. After fully chilled cut in slices and enjoy! 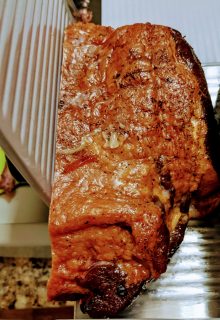 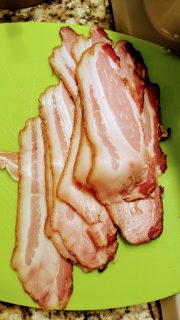