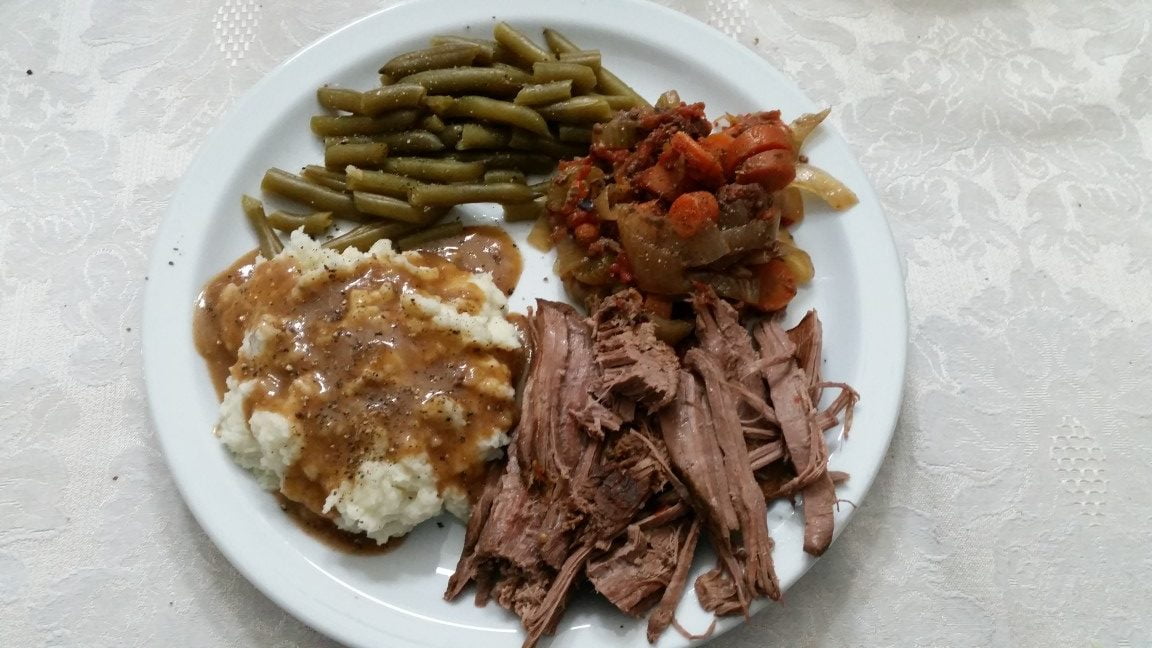 My week is really busy, so I had to plan our meals accordingly, including a soft meal Thursday since my daughter is getting braces. All week, I need quick, healthy dinners. Today I needed to leave early, so I put together the makings of a pot roast the night before, placed the slow cooker crock in the fridge, and just plopped it back in the base before leaving. I made mashed potatoes, gravy from the drippings, and popped the lid on some home canned green beans. We had a big, home cooked meal with little effort.

To the slow cooker, I added:

One large, and one medium onion, sliced
1 1/2 pound of sliced carrots Salt and pepper beef roast on both sides and place on top of vegetables. Then top with: Put cooker on low for 6-8 hours, or until tender. (Mine took 8 hours because the roast was partially frozen.) To make gravy, plate roast, and strain vegetables. Take three tablespoons of flour and mix with enough beef drippings to make a thick (not chunky) roux. Bring beef drippings to a boil, and add roux, and whisk until incorporated. Salt and pepper gravy to taste. If gravy isn’t thick enough, make more roux, and whisk in gravy. The gravy will be a little sweeter than traditional beef gravy because of the tomatoes.

Speed up your week night dinners with the slow cooker. These are some of my family’s favorites.

If you have slow cooker recipes of your own, pop on over to Preserved Home’s Facebook page  and share your favorite dishes.