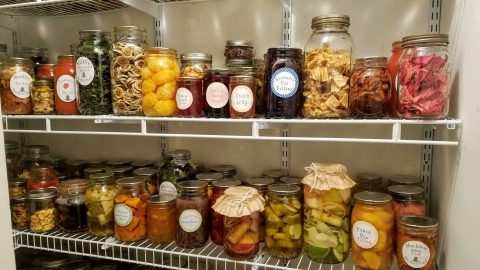 This is my first “Around the House” post! I’m always doing interesting little things around my home I want to share, but individually they aren’t worth, or ready, for an entire post. Instead, I’ll be sharing tidbits in one post. I hope you enjoy!

It’s an exciting week in my kitchen. First, a friend offered me a box of freshly picked pears the day before I left for vacation. I placed them in my extra fridge in hopes they would stay in shape upon my return. I started peeling the pears and realized, they just weren’t ripe. I could not bring myself to throw away the peeled, underripe pears, so I decided to make a fermented pear/apple vinegar. I didn’t have enough pears to fill up the jar, so I cored some apples and threw in the apple scraps. 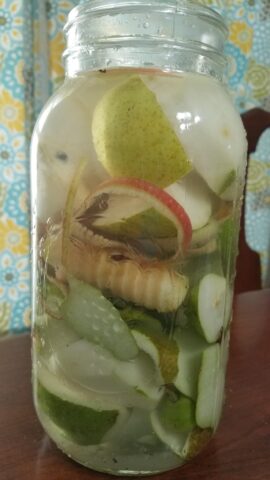 Making fermented vinegar is new to me, but I’ve made fruit infused vinegars before, but I don’t remember getting a “Mother of Vinegar” on the top as I did this time. All I did was pour regular old cider vinegar over fruit, placed a coffee filter on top, and left it for 6 weeks. According to the company, Vinegar Shed, “A vinegar mother is a gelatinous disc that looks like a slice of wobbly raw liver. It’s composed of a form of cellulose and acetic acid bacteria (mycoderma aceti) that develops on fermenting alcoholic liquids, and turns alcohol into acetic acid with a little help from some oxygen in the air.”

The Mother from my strawberry vinegar looks like this: 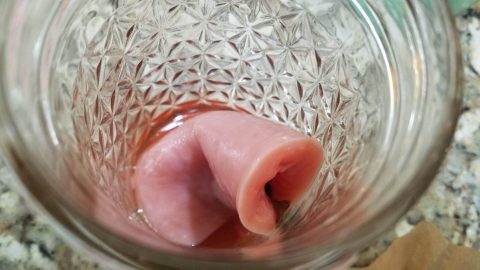 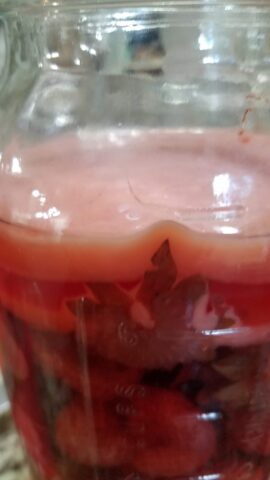 I know, it’s creepy looking, but I’m excited just the same. I’m using this to speed up other vinegar ferments I have going. For now, I have them tucked in this little jar for further use. If you know anything about this Mother of Vinegar thing and have wisdom to share, I hope you will comment. I’m still learning! 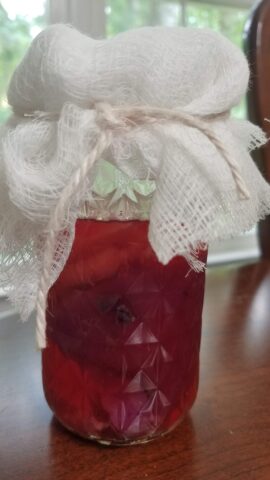 My biggest news is, my grain grinder arrived! 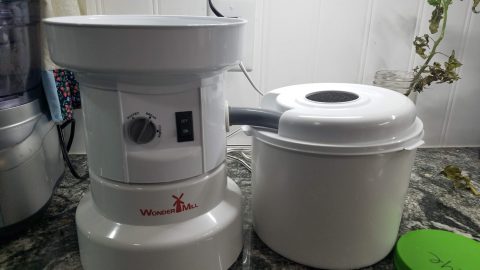 I have to experiment, and will blog about it soon. I ordered grain from a co-op, which hopefully will arrive in August. Until then, I made cornmeal with popcorn kernels! 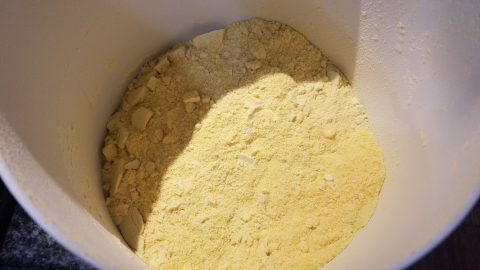 Another project is freezer purging, which means canning up things to make more space.  I caught Costco’s ground beef before it went up to $4 a pound, and thawed a 6 pound pack. This pack of beef made 5 jars of meatballs and gravy, with each can feeding my family of four. I will serve over mashed potatoes, and with peas. I made a sample jar last month, and these are absolutely delicious! Two of these jars will be enjoyed this fall and winter on a busy, chilly nights, and the others will go into my long term food storage. Meatballs can beautifully! 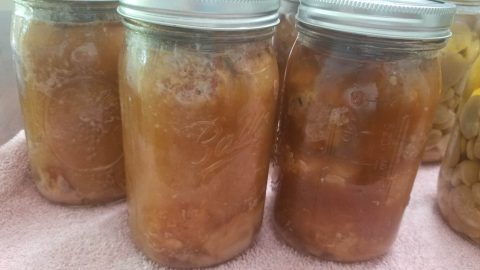 While digging through the freezer, I found turkey breast and chicken carcasses, so I made broth (bone broth, stock, or whatever is fashionable to call it these days!) and pressure canned. We aren’t sick much, but if one of us does get sick this winter, I’ll pop some of this open. It’s so pretty! I canned five quarts. 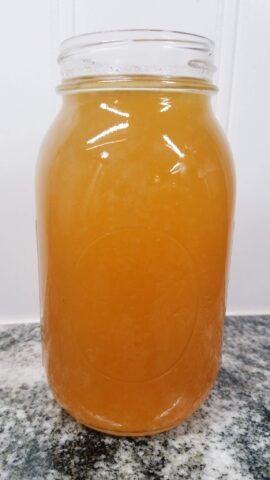 If I did not intrigue you with my strange looking Mother of Vinegar, I have another interesting experiment. I dehydrated homemade sauerkraut, and it’s fantastic. 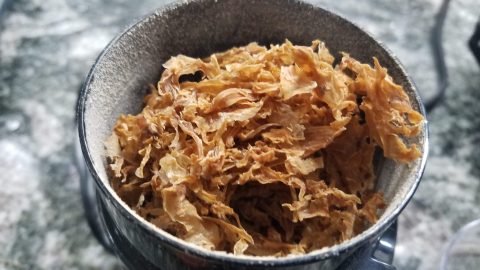 We actually had it on popcorn tonight instead of salt. The flavor to me is reminiscent of salt and vinegar chips, and ranch. I might actually put this in sour cream as a dip as well. I dehydrated the sauerkraut at 135, but my smart friend Tara told me cooking at that temperature would kill the good bacteria. While bummed, I did learn it still has anti-inflammatory benefits, and will look for ways to consume it, because it’s also delicious!

That’s my “Around the House” report, detailing the things which keep me from deep cleaning the house. Blessings on your domestic adventures this coming week!