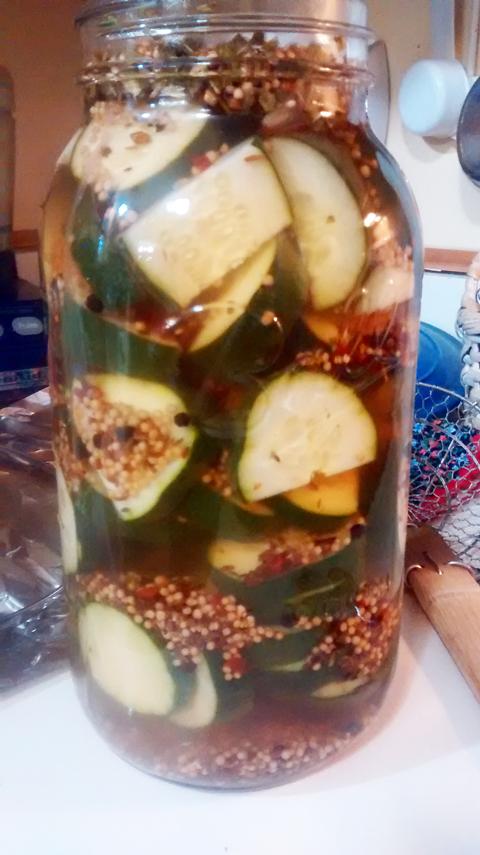 My brother-in-law Greg doesn’t like dill, so he typically passes over the pickles. I make three kinds of pickles, and one of them sans-dill, or so I thought. I brought some to our family camping trip, and bragged I brought dill-less pickles just for him, and they passed his test. But after reviewing my recipe, I realized that while my pickles don’t have dill weed, they do have dill seed. Since he doesn’t have an allergy, not sure if I should come clean, or let him enjoy dill-kissed pickles without him knowing. It’s a pickle of a decision, that’s for sure.

I was confused about the recipe, because I made three different kinds of pickles last week, as I was attempting to put up 80 pounds of cucumbers I bought. I didn’t mean to buy that much, just like I didn’t mean to buy 24 pounds of cherries the week before (thought they were a pound a bag, not 2 1/2 pounds a bag). I was at the farmers market, and my favorite produce vendor offered me a giant box of organic cucumbers for $10. If you have followed my blog long enough, you know I can’t turn down inexpensive produce, so of course I bought it. To my credit, he also offered me a deal on corn, but I could not process that much before my camping trip.

If you are looking for a delicious, easy pickle, this is your recipe. No canning involved, and these will keep in the refrigerator for quite some time. The cucumbers I bought were not pickling cukes and were a bit seedy, so I took out the seeds. I use 1/2 gallon Ball jars for these.

Prepare cucumbers, and place in a large bowl.

Bring to a boil the vinegar, water, pickling salt, sugar and pickling spice. Cook until sugar and salt are dissolved, about 5 minutes.

Pour heated mixture over cucumbers, cover, and cool for about 30 minutes. 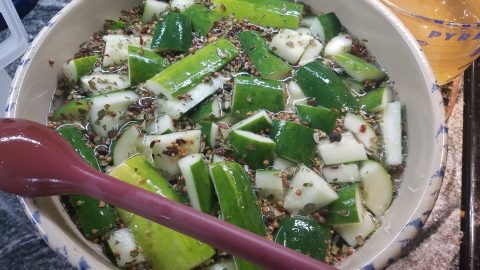 Meanwhile, add remaining ingredients to a half-gallon jar. After the 30 minutes, add cucumbers and brine to jar. When cool, store in the refrigerator.