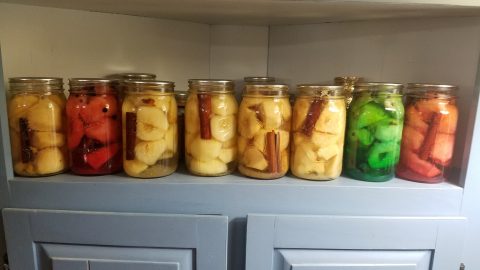 I got a new kitchen toy – a steam juicer! It’s a three piece contraption with water in the bottom, a juice catcher in the middle, and a strainer-like top for the fruit. The juice comes out of a hose. 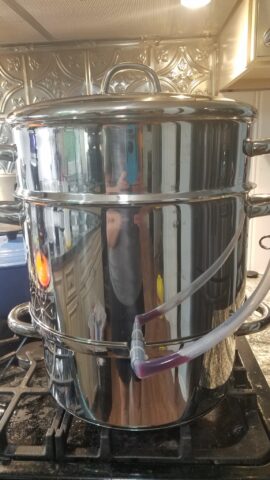 My first experiment was with grapes, because they were on sale for 89 cents a pound. Filled to the brim with grapes, my juice steamer yielded two, half-gallons of grape juice. Only apple and grape juice have been tested as safe for canning in half-gallon jars. I wish the USDA would do more testing for these sized jars, because I would love to can soup in them!

Here is my grape juice. 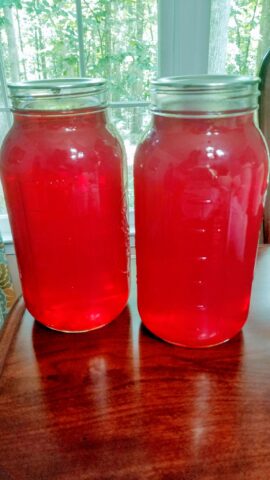 Then I decided to clean out my freezer, and emptied various bags of berries into the steamer. 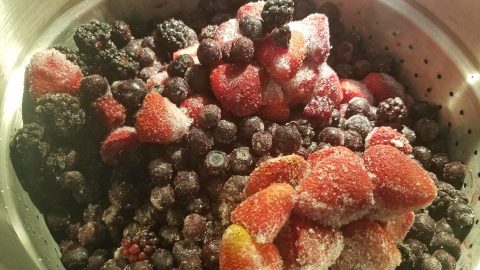 This yielded three beautiful quarts of berry juice. It’s so pretty, I love gazing at these jars! 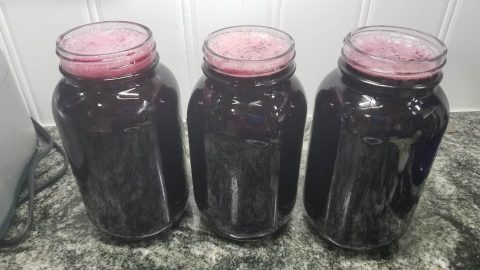 And I also did orange juice, but it wasn’t what I expected. The juice was clear and tasted kind of bitter. I used my electric juicer to make pure orange juice and added it to what I got from the steam juicer. The result was good, but tasted more like a grapefruit juice. I got 6 quarts from 24 pounds, and canned. I then took the pulp, which was full of flavor, and made orange jam and an orange-cranberry quick bread. The oranges were 67 cents a pound, so I got my money’s worth! 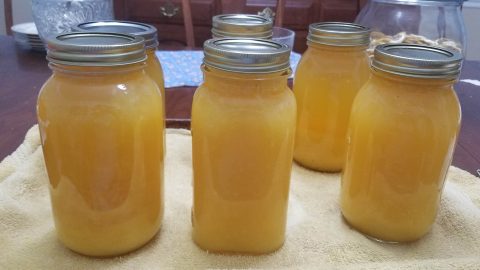 In playing around with more fruit, I took advantage of a big mango sale – they were 39 cents each. I dehydrated some, and used the fruit scraps to ferment my own vinegar. It turned out sweet and delicious, and I’ve been enjoying it as a probiotic treat in ice water. 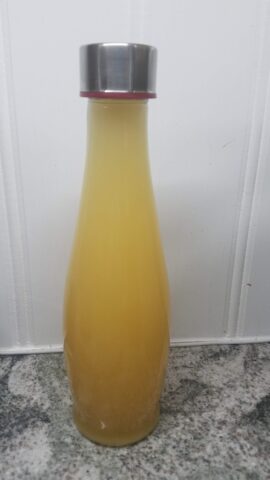 I’m adding this to my collection of other homemade vinegar – some fermented, and some infused. Pictured here, left to right, are blueberry, peach, strawberry, and mango vinegars – all made from fruit scraps. 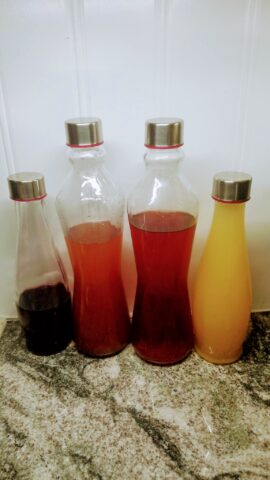 In another new preserving adventure, I canned butter. When Costco had butter for $1.70 a pound, I felt like I had no choice but to stock up. I kept some for the freezer for baking, and canned several pints for long term storage. I made a few jars of garlic butter too, just for fun. What wasn’t fun, was staying up and shaking these jars every five minutes to mix the solids as they cooled. My husband and I decided to do this after he got off work one night, and he took one for the team and stayed up till 1 a.m. shaking the jars as they cooled.

Many well-respected video bloggers preserve by “oven canning” butter, but just to be safe, I pressure canned the butter, which should maintain its quality for five years. 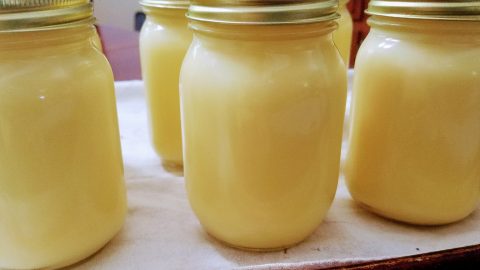 Someone blessed me with a free box of pears, so I decided to can Christmas pickled pears. No, they don’t taste like pickles, but they do have some vinegar and spices. It’s a recipe my mother-in-law made when my husband was growing up. She has gone to be with the Lord, so it brings me joy to continue this tradition for him, and pass on to my daughters. I always just make these and put in the fridge, but since I had the pears anyway, and the fact it will save me time at Christmas, I decided to can them up. I did some jars with just cinnamon, but now wish I would have added a touch of vanilla. Maybe next year! 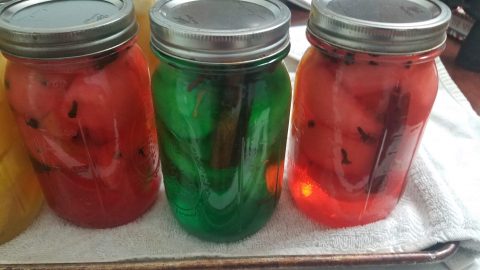 I decided to start making my own yogurt again since my kids eat it so much, and it’s a great money saver. I can get gallons of milk at my Aldi for $1.50. It takes a half gallon to make two quarts of yogurt, which means I’m paying 75 cents for a half gallon of yogurt. I have been putting my homemade jams and jellies in the bottom of the cups, which my youngest loves, but my older daughter likes the actual yogurt flavored. So, now I’ll be making a variety of extracts to flavor the actual yogurt, so they will both have the kinds they like. 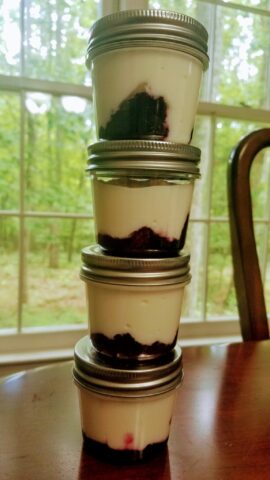 My next experiment was using barley flour. I bought a 25 pound bag of barley, and realized I could grind this into a beautiful, soft flour. I make an oat flour bread, so I just replaced the oat flour with barley. The bread turned out to be more like an Italian bread texture, which was a nice surprise. 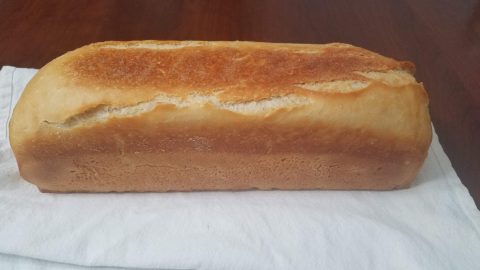 I also made barley flour pancakes last weekend, which were delicious! 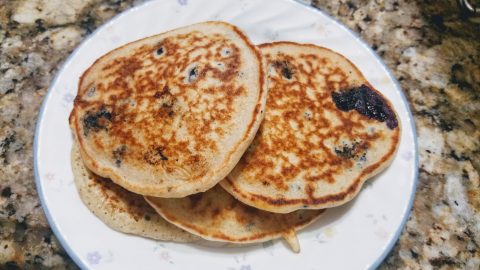 Speaking of experimenting with different types of flour, I just got in an order of four different kinds of grains – rye, hard white wheat, soft white wheat, and hard red wheat. 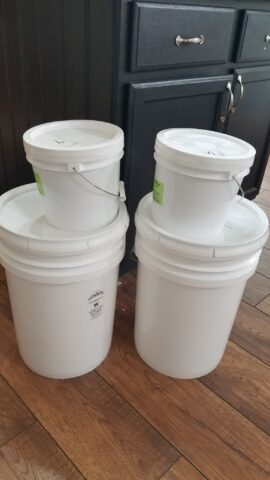 Besides the rye, I haven’t baked with these before so it’s going to be trial and error. If anyone also grinds their own grain and has recipes employing these kinds of grain, please post them in the comments!

Now it’s time to clean up the house, and dig more into the 131 pounds of produce I just bought. Stay tuned for more on all that . .