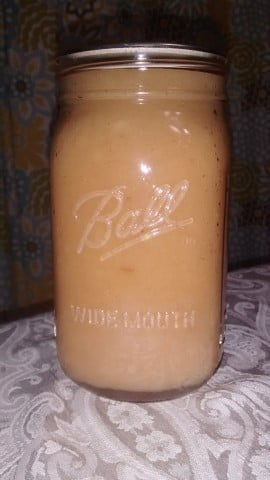 It’s apple season again, and I have apple sauce on the mind. Last year I didn’t make nearly enough to last me until the following apple season. Part of the problem was my methods – – which took a long time, especially considering I deal with 45 pound boxes of apples at once. The other problem is my family can slam a jar of apple sauce like no one’s business. I found a solution to both, and already have 10 quarts tucked away in my cozy pantry. While 10 quarts is a good start, it’s not nearly enough. I’m just getting started, and here’s how I’ll amass enough quickly to last until next season.

Let me start out by explaining the evolution of my applesauce making journey.  I had started out peeling the apples by hand, until I thought my wrist was going to fall off. Then, I wised up and got an apple peeler/corer.  Wow, does this make a difference. My contraption cores, peels, and slices the apples in seconds. The next improvement was cooking my applesauce in a giant roaster, so I could do 30 pounds at once. This was more efficient, considering I had three slow cookers going simultaneously the previous year, but it does take all day long, which includes occasional stirring. I needed another way to my quicken pursuit for stocking up on apple sauce.

I am an active participant on Kat’s Canning Tidbits Facebook page, where I glean information on canning from other posters, and Kat (Kathy Wellman) herself. Although I’m a capable canner, I’m not an expert. I am deepening my knowledge by engaging in discussions on food safety and methods on Kat’s page. In an apple sauce discussion, Kat told me about pressure cooking apple sauce. If you have never used a pressure cooker before, you might not know the expediency it affords you. For instance, instead of cooking stock for hours, you can have the same result in 30 minutes. This is how I cook my chicken stock.

Kat’s method is, bring the cooker to pressure, and when it reaches 4 pounds, take the pot off the burner, following manufacture’s instructions for opening (which includes waiting). I wasn’t sure it was going to work, and when I did the big reveal, it looked like failure. Just very droopy, intact apple slices. But when I stirred the apples, they fell right apart into a chunky puree. Victory was mine! I opted for a fine puree instead of my typical chunky, so I employed my immersion blender to do the rest. I couldn’t believe it worked.

Because you always add liquid when pressure cooking, I decided instead of water, I would use apple cider, which gave it a nice flavor.

Here’s my recipe for pressure cooker apple sauce, which yields about 4 quarts:

Wash, peel, core, and slice apples into thin pieces. Throw them in pressure canner until 2/3 full. 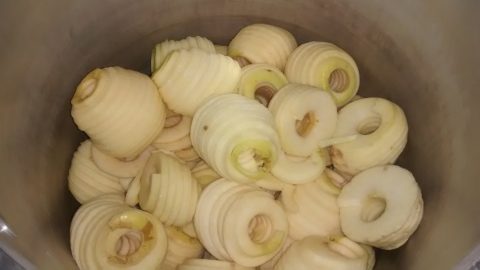 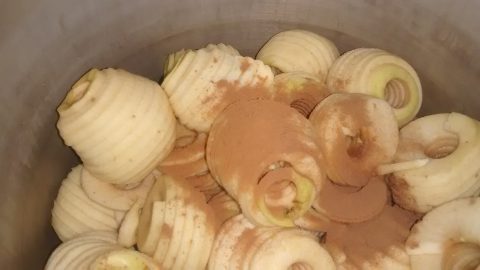 Lock lid of pressure cooker, and fit with gauge. Bring up to 4 pounds of pressure, then remove from heat.

Let cooker come down from pressure to zero. Take gauge off. Wait 10 minutes, and take off lid.

For canning the applesauce:

Fill jars (which do not have to be sterilized, just clean, since they will be processed for more than 10 minutes) to 1/4 inch of top. Make sure there are no air bubbles. Wipe rims clean, and fasten lids and rings. Water bath can for 15 minutes for pints, and 20 minute for quarts. I do quarts because it saves shelf space, lids, and my family eats it so quickly anyway.

Pull jars from water and let rest for 24 hours without disturbing. If the lid pops down, your apple sauce is shelf stable.

I solved my first problem, which was making the process faster, but what about my family devouring my supply too quickly? I found more apple sauce fits into a jar if pureed, but they still like chunky, so I will do both. I will have to make more, obviously, and also ration. I’m still not sure how many quarts I’ll need for the year, considering some will also be offered to company. I’m thinking 25. I also want to try my hand again with canning apple slices. Mine turned out floppy last time.

I buy my apples in bulk, and always consider price point verses my efforts. A couple weeks ago I got some for 28 cents a pound, but my deals are hit or miss. I’m going to keep scouring the farmers market for more apple deals so I can meet my apple sauce quota, make apple butter, dehydrate apples, and do more experimenting with canned apples. (Oh yeah, I’ll can apple pie filling too.) I’m exhausted just thinking about it, but I’ll be happy with myself after I’ve accomplished my goals. Apparently, my apples aren’t the only ones feeling pressure, but the season is a short window, and with my new method, I’m looking out of it with success.

Sometimes I open my pantry and gaze at my beautiful jars of food. The ruby red grapefruit, snugly nestled in the jar, the...