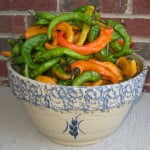 We went back to the farmer’s market this weekend, and decided to check out an area that sells produce in bulk. As we walked through we didn’t see much that was for us, except for a 10 pound bag of onions. We also scored asparagus for $1 a pound. We were about to head out, and this Hispanic farmer approached us. He could not speak English, and simply held out this big basket of hot banana peppers and said, “Three dollars.” We hesitated. The farmer grinned. I spoke in a little broken Spanish, and he in broken English. We mostly smiled and motioned. Although he couldn’t make a proper verbal sales pitch because of the language barrier, his charm transcended language, and we bought them. So Doug and I looked at each other wondering what the heck we are going to do with 5 1/2 pounds of banana peppers. While our sense of adventure has not always paid off (to say the least), it did this time. We now have 7 pints of pretty canned green, yellow, and red banana pepper rings. 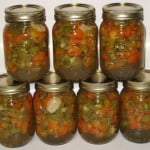 It was my first time canning using a water bath, and it wasn’t as scary as I imagined. This summer my sister-in-law Connie and I made jam,  (not freezer jam) using a recipe that did not require a water bath. Today Doug and I canned three pounds of banana peppers, and other 2 1/2 pounds are in my dehydrator right now. Jenny suggested drying the rest and making wreaths, so that’s what we will do. She has a gigantic bay leaf bush, so our craft will be really inexpensive, and (hopefully) look like a $75 wreath from Williams-Sonoma.

This will not be my last canning experience for the year. I make apple butter every fall in the slow cooker, and instead of storing the jars in the fridge, I will preserve using the water bath method. Maybe I’ll make apple sauce too. POP! Just heard my last lid seal. Yeahhh!

NOTE: We thought our peppers were sweet until they were sliced and then “zowwie!” I discovered they were hot after I sliced them all, and now under my fingernails hurt. Use gloves!

Wash peppers and cut small slit in each pepper (this prevents shriveling) do not cut of the pods. Pack peppers into clean hot pint jars. Add one clove of garlic and one hot pepper to each jar (you don’t have to add the hot pepper if you don’t like them hot).

Bring remaining ingredients to a boil. Pour hot liquid over peppers in the jars leaving 1/2-inch headway. Place lids and rings on jars and process in a hot water bath for 10 minutes. Remove from hot water bath and place on counter till cooled. Check to make sure jars have sealed. Refrigerate any that haven’t sealed.

Some of my best memories are from my Aunt Gloria and Uncle John's house - - truly the old-fashioned kind....