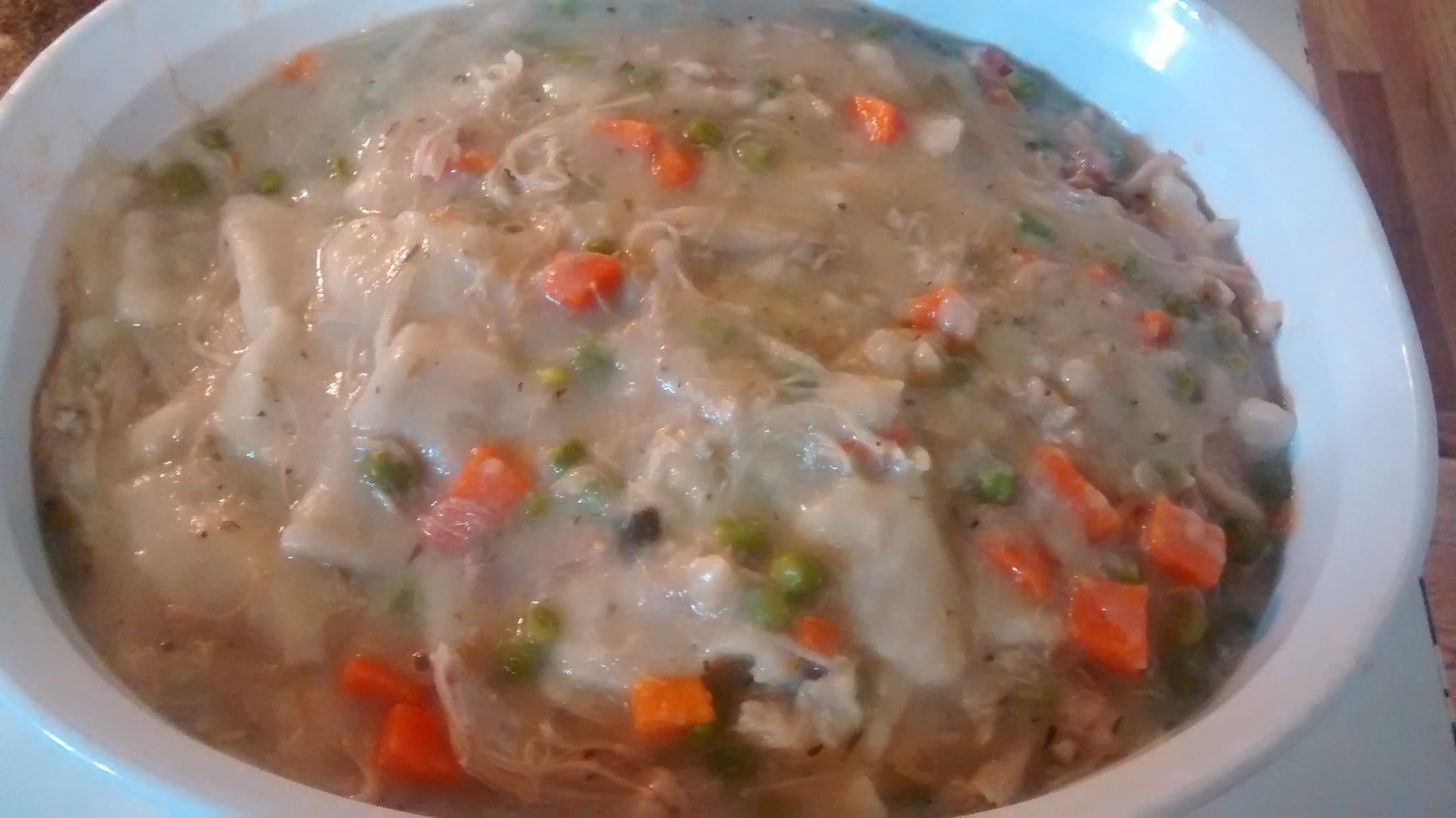 It’s been a week of chicken catastrophe. First, after I bought a 40 pound box of chicken leg quarters because they were only 35 cents a pound, and if you wanted the deal you must take the whole box. I was thinking the leg quarters were individually frozen, so after bringing them home, I stuck the box in my freezer. When I took out the box, to my horror they were all stuck together. The past several days have involved me processing 40 pounds of chicken. I made for the freezer: pot pie filling, chicken tortilla soup, white chicken chili and grilled chicken. I canned seven quarts of chicken stock, and seven quarts of chicken vegetable soup. I’ve made chicken curry sandwiches for lunches. I also made chicken and dumplings, twice, hence part two of my chicken catastrophe.

Chicken and dumplings is one of my family’s absolute favorites. Not to brag, but it’s even better than Cracker Barrel’s. So when I made this dish yesterday, I was really excited to plate it up for my husband and kids. I did a taste test, and truly it was great. I took the pot off the burner moved it to the counter, because cooling the dish allows it to further thicken. As I reached up for a bowl, my hand slipped and a ceramic bowl fell on the edge of the pot, and shattered into the chicken and dumplings. Most of it was big pieces, so I picked them out, and searched for slivers. I knew I had to throw it out, but my mind was in a battle to save the meal. Flushing it down the sink was a painful experience, but I was resolved to make it again the following night.

This dish is actually easy to make, if you use previously made stock and have shredded chicken on hand. Also, my friend Beth suggested I make a double batch of dumplings, so I can have one batch for the freezer. With the stock and meat I have canned, and dumplings in the freezer, I can have chicken and dumplings at the tip of my fingers. Besides being delicious, it’s also very economical, especially if you opt to make your own stock.

Growing up, my mom made chicken and fluffy dumplings. They are basically a round biscuit which ends up being soft on the outside, and fluffy on the inside. You drop the biscuit dough in the hot broth, and it cooks the dough while thickening the broth, just like slippery dumplings. I’ve toyed with the idea of doing a batch of chicken and dumplings with both kinds.

Traditionally, chicken and dumplings doesn’t contain vegetables, but I add peas and carrots to mine. Regarding the vegetables, I use frozen carrots because they are par-cooked and don’t need to simmer long. Since I get my carrots in bulk, I dice and blanch my own carrots for using in dishes like this one.  I also add a dried bouquet garni mix to many of my comfort dishes besides this one, including chicken pot pie and my canned soups.  It really adds something special you don’t find in other dishes. I always have some one hand. Cut in shortening with pastry blender. Add 2/3 cups of reserved stock to dry mix to make the dough. Knead for 1 to 2 minutes. Roll dough to 1/8 inch thickness and using a pizza cutter, slice into two inch squares. Heat remaining stock to boiling, and add bouquet garni. Drop dumplings in hot broth, and lower heat to a low simmer. They will puff up immediately – – it’s like magic! Check broth for seasoning. Test one of of the dumplings by cutting in half. If the center is darker than the outside, it likely needs another full 30 minutes. Bring mixture back to a simmer (cold foods will bring temperature down) and replace lid. Cook for another 20 or 30 minutes, but again, make sure dumplings don’t stick to the pot’s bottom.

After dumplings are done, remove from heat and let the chicken and dumplings cool for about 10 minutes to allow the mixture to further thicken. If you try this, report on Preserved Home’s Facebook page, and let me know how you like these chicken and dumplings!